Marshallgate: Marshall Sentenced to 18 Months in Prison after Guilty Plea

I'd be remiss if I didn't take a pause from my break in blogging to note that Mike Marshall, a Democratic Party operative from North Vernon about whom I blogged extensively back in 2011, plead guilty to vote fraud in January and today was sentenced to eighteen months in prison.

Michael R. Marshall, 60, of North Vernon, a veteran Democratic Party volunteer in Jennings County, was sentenced on Wednes­day to 18 months in prison, with nine months suspended, on three counts of voter fraud.

Marshall made an agreement last January to plead guilty, but sought to have the charges reduced from Class D felony to Class A misdemeanor counts at the sentencing hearing.

During the hearing, the crowded courtroom heard arguments from Marshall's attorneys, Larry Wilder of Jeffersonville and Jim Voyles of Indianapolis, and the special prosecutors, Aaron Negangard of Law­renceburg and Lynn Fled­derman of Batesville.

Negangard brought forth four witnesses for the state's case, including Anthony Scott of the Indiana State Police. Scott's involvement began with the request for investigation from the Jennings County Prosecutor's Office in January 2011, after the local Democratic Party placed an advertisement in the Plain Dealer. The ad pictured local resident John Cook was pictured holding a photograph of his son, Ben Cook, claiming that the Republican Party was attempting to disenfranchise his son as a voter in the 2010 election.

"I believe the community deserves a sense of justice in this regard, and I believe he deserves to spend some time (in prison)," Dorsett-Kilgore said.

Jines-Plessinger had a similar sentiment, asking Webster, "As an elected official and a business owner, how can I look in the eyes of my constituents if justice isn't served?"

Jack Kelley, a Repub­lican who served on the 2010 Absentee Election Board in Jennings County, also testified at the hearing and spoke of the absentee ballot applications in question and their being challenged by him among the more than 240 applications he found to be questionable.

The article about Marshall's guilty plea a few months ago is available here; the guilty plea was apparently entered into in hopes of the court reducing the felony conviction to a misdemeanor.

The parade of Democrats rushing to Marshall's defense even as he heads off to prison is really something to behold:

Franks testified to the civic mindedness of his former boss. "Michael has helped so many people in this community. He is sorry for what he's done, and I don't believe that prison would be the right thing to do in this case."

"Mike is an honorable man, a man that cares about his community. We are all guilty of making mistakes, and I believe we all deserve a second chance," Bowling said.

Snyder, the county's Democratic Party chair, testified that Marshall's character and concern for his community were something that impressed her always.

Negangard argued, "I'm concerned that the Demo­cratic Party is using as their standard bearer someone who is now admitting to defying the law."

Understatement of the year from the special prosecutor. As always, it is Marshall's supposedly noble ends and intentions that justify his crooked means.

Snyder, the Democratic Party chair, was a member with Marshall of the so-called "Get Out the Vote committee" he led beginning in 2006. She's apparently quite close to him, and Marshall helped her with her transition to become Jennings County Democratic Party Chair, and "encouraged her to run."

Marshall's own statements about why he did what he did are also interesting:

In a statement to the judge, Marshall acknowledged the wrongfulness of his errors, stating, "I would never condone someone doing what I did, but I did it because of who I did it for."

The defendant was adamant that his actions were not done in malicet. [sic]

"I have learned my lesson. I promise the court I will not disappoint you ever again," he added.

Again with the protestations of the supposed nobility of his motives and the ends he sought. You'd think these people were all singing from a songbook that had a common author.

In fact, back in January Democratic Chair Snyder couldn't wait to have Marshall back up to his old tricks:

Jennings County Democratic Party Chair Karen Snyder said she stands behind Marshall and said his decision on the plea agreement was a very difficult one for him...

Snyder said she trusts Marshall and that the Democratic Party will be glad to get him back as a volunteer after he sat out the 2012 election because of the charges pending.

"I know Mike as well as most people and I trust him," she said. "Without question, we will welcome Mike back to work for the party."

The judge's sentencing ruling is worth noting, as well:

Before handing down the sentence, Webster noted the vitriol surrounding politics on both sides of the aisle, and the measures he took toward ensuring the court's integrity.

"When this case first came about, I knew there was a possibility for political overtones," the judge said. "That's why I appointed special prosecutors for this case from both (political) parties."

While the judge made note of Marshall's longtime community involvement and lack of criminal history, Webster showed concern for the impact the defendant's actions could have.

"Those who tinker with the election process are tinkering with the foundations of democracy," the judge remarked. "I worry that this will only serve to further voter apathy and voter cynicism. I don't want the citizens of Jennings County to question the appointment of elected officials and wonder if it was really their votes that put them there."

That final bit there really flies in the face of the parting arguments made by Marshall's Democratic defenders, particularly the Jennings County Democratic Chair.

After the sentencing, the disappointment of Marshall's many supporters was palpable.

"I'm just amazed that a man of his character is not being allowed to serve his sentence on house arrest rather than be incarcerated," Bowling said. "People are found guilty on drug charges all the time, but this man, who has served his community for all his life, is being treated like more of a danger than they are. I just don't believe it."

"I am just really disappointed. There are no victims in this case," she said. "We have three people who wanted to vote, and Mike wanted to help them do that."

The victims of Mike Marshall are the voters and citizens of Jennings County that cast legitimate and legal votes, only to have their votes undermined and cheapened by Marshall's illegitimate and illegal votes.

That's not a victimless crime. That's a crime with thousands of victims, tens of thousands when you consider every elected office on the ballot whose election outcome was influenced by the actions of this man.
Posted by Unknown at 6:07 PM

So God Made a Liberal

Email ThisBlogThis!Share to TwitterShare to FacebookShare to Pinterest
Labels: Humor

Quote for the Day

“It is not the critic who counts, not the man who points out how the strong man stumbles or where the doer of deeds could have done better.

“The credit belongs to the man who is actually in the arena, whose face is marred by dust and sweat and blood, who strives valiantly, who errs and comes up short again and again, because there is no effort without error or shortcoming, but who knows the great enthusiasms, the great devotions, who spends himself for a worthy cause.

“Who, at the best, knows, in the end, the triumph of high achievement, and who, at the worst, if he fails, at least he fails while daring greatly, so that his place shall never be with those cold and timid souls who knew neither victory nor defeat.”

- Teddy Roosevelt
Posted by Unknown at 7:39 AM

Email ThisBlogThis!Share to TwitterShare to FacebookShare to Pinterest
Labels: 2012 Election, Quote of the Day

Photo of the Day: Biden vs Ryan 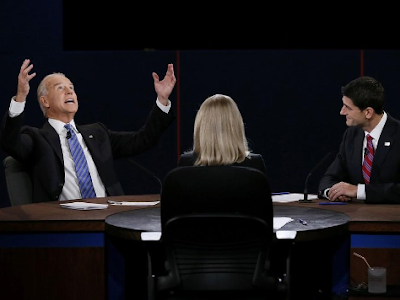 Sometimes, a picture really is worth a thousand words. Or a thousand interruptions, smirks, laughs, sneers, or whatever.
Posted by Unknown at 7:58 PM

It occurs to me that the altitude didn't harm Obama when he was speaking in front of those Styrofoam columns to accept the nomination in Mile High Stadium four years ago.
Posted by Unknown at 10:09 AM 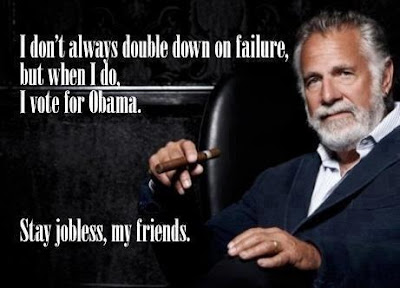